Food Trucks in a Denver Park

Previous Next
Food Trucks in a Denver Park 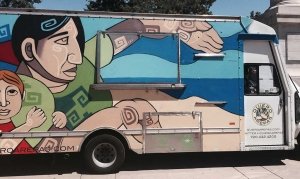 The Quiero Arepas food truck , one of thirty food trucks and carts at a downtown Denver park.

While in Denver to attend the IRS Nationwide Tax Forum, I went out for lunch. The hotel concierge told me of an event held in a local park with 30 different food trucks. This fit my interest in the unique and unusual.The trucks were at the downtown park on Tuesday and Thursday; I went by myself on Tuesday, and came back with my wife, Nicole, on Thursday. We didn’t have time to sample food from all the trucks, so we probably missed some terrific offerings. That said, here is a list of favorites from our two visits.

Queiro Arepas
This widely recommended food truck serves Venezuelan food based on arepas.
The arepa is a flat “bread” made from ground corn. Made from scratch in the truck, the aprepa dough is formed into a patty that is grilled, baked, split open and stuffed with a variety of ingredients. I had one filled with plantain black beans, cabbage, avocado, salsa and braised beef. It was called Pabellon and was delicious. 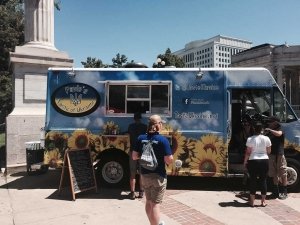 Pavlo’s Taste of Ukraine
This was a truck featuring Ukrainian food. I overheard him tell people that his ninety-one-year-old grandmother taught him how to cook. I chose a dish of potato and cheese vareniki (also called pierogi) with cooked onions on top. Again, this was very tasty.

The Rolling Italian
Place provolone, mozzarella, Monterey jack, cheddar, and Parmesan cheeses together on a grill at a special temperature for a fabulous grilled cheese pizza. Top the pizza with your choice of with sausage, peppers, onion, ham, and eggplant. The business is a food truck called The Rolling Italian. Their tiny cannoli were also delightful.

Ba-Nom-a-Nom
Vegan frozen soft-serve type treats, made to order from frozen fruit. No sugar added to these delightful cold deserts. Nicole and I sampled the blackberry, banana, pineapple and the mango pineapple flavors.