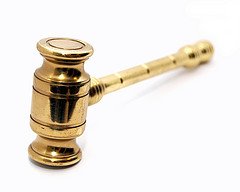 We recently wrote a post describing a MERS defeat in Oregon Bankruptcy Court, and MERS (an acronym for Mortgage Electronic Services, Inc., an electronic registry) is in the news once again. This has not only been a hot topic in Oregon, but people around the nation have been attacking MERS as foreclosures mount and banks turn defaulting homeowners out into the streets. Some states have sided with MERS and the banks, but Oregon appears to be following the lead of states that have not.

So what do you do when the courts start consistently ruling against you? You try to change the law, which is exactly what several banks and MERS just tried (and failed) to do in Oregon. Oregon Live recently described attempts by the finance industry to attach an amendment to SB 519 that would change ORS 86.735, among other statutes, to allow MERS to foreclose on homes even when the true beneficiary has not been properly recorded. Even better for MERS, the bill amendment was to apply retroactively. In the article, State Representative Jeff Barnes (D-Aloha) is quoted as saying: “there was a lot of opposition. I probably got more emails about this than anything all session.” The article was also one of the most talked-about on the site, with over 91% of the voters in their poll siding against the MERS amendment.

Mortgages are a topic that may bore some, but there are clearly many people, both attorney and not, with a high stake in the outcome of this struggle. So far, the courts and the legislature of Oregon has sided with the people against the banks, but the situation warrants further monitoring.

Relief from Tax Filing Deadline for Oregonians in Wildfire Areas

In a September 16, 2020 press release, the IRS offered Oregonians living in certain counties affected by the recent wildfires some breathing room from the upcoming October 15, 2020 deadline […]